There hasn't been too much new going on here. We've been keeping busy during the week with various activities, swimming, play dates with friends, running errands etc. It's been nice to have normal weeks lately and relaxed weekends. The summer time is always busy, fun yet busy so it's nice to have everything slow down a bit.

The boys are doing great, all 3 of them! :) Jim's business is starting to feel a little more normal, like it was before the market went spiraling out of control last fall. We pray it stays this way!

Jacob is doing great. He is definitely at the age of asking questions and has been for some time now. The difference is now his questions are real questions and I can tell he is asking b/c he really wants to know how something works or why something is the way it is. He's not asking questions to just talk (like he used to do, haha)The other day he asked me "How does Santa's sleigh go when there isn't any snow?" (Not sure where this one came from but it was a good thought.) And today he asked me "How does the sun actually go down and the moon comes up?" Jim answered it by trying to explain how it all works (the Earth actually moves around the sun etc etc etc) but Jacob didn't like that answer and said in response "No, the sun actually goes down into the sky." So we decided the real science explanation will come later! haha. I told him awhile back that the sun was actually a big ball of fire and for days after that he would say to me while we were in the car "Mom, look at that big fire over there!" Too funny. The other day he was watching his letter factory DVD and said "Mom watch this part, the B can't jump until he makes his sound appropriately." I said. "Appropriately, huh" and he then repeated what he said as if it was no big deal! He also asked me recently "How does a train stay on the track?" It amazes me how much his little brain is working and how he's trying to figure it all out! I have to say that age '3' has been the best yet. I have thoroughly enjoyed this age and still watch in amazement how big my little boy is getting! I'm praying the 4's are just as good if not better!

Little Luke is doing great as well. He seems to have a lot more energy lately and has become quite independent when it comes to trying to do something. For example, in his little Gymboree class if I'm trying to help him climb up something, he basically shakes my hand off of his arm so he can do it by himself. He is also turning into quite the climber these days. He loves climbing up and into everything.(you'll see in the pictures below) He also LOVES to drink from a real cup and does not like for me to help him. And yes we have had some huge messes from this independent move! Today in Mass, we were sitting in the back in chairs (where we have been sitting until Luke isn't such a busy body and can be a little more contained for the length of Mass). Anyway, at one point he was being loud so I put my finger up to my lips and said "shhh". He then copies my gesture. So then a little while later, Jacob was up in Luke's face saying something and Luke put his finger up to his mouth to shhh Jacob. It was too funny!!

Luke also just got his last K-9 tooth yesterday, yippee! We have had some restless nights with this last tooth but once it broke through the gum, we are back to normal! Hopefully we will have a nice break from teething until he is closer to 2!

As I said he is quite the climber these days 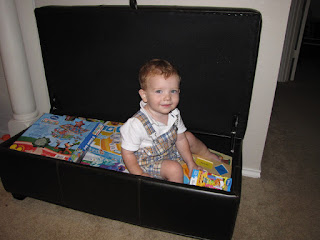 And again, this is actually a basket full of clean clothes! 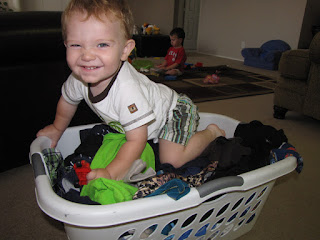 So proud of his accomplishment 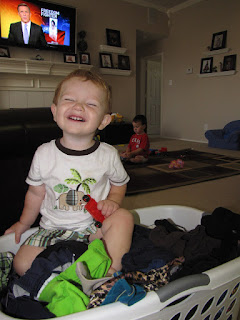 Our airplane mechanic- Papa Jim would be proud 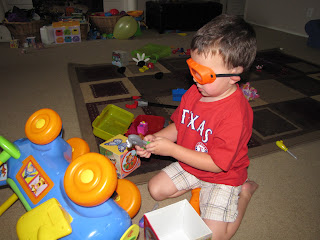 At one point he had the airplane propped up on his blocks and was working underneath it, but I didn't grab the camera fast enough! 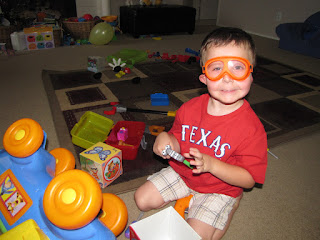 Luke admiring his new tennis shoes. I think he looks so much bigger when he wears them! 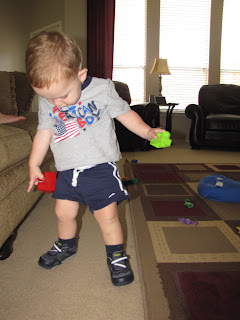 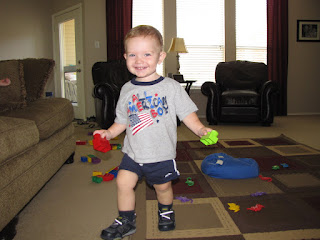 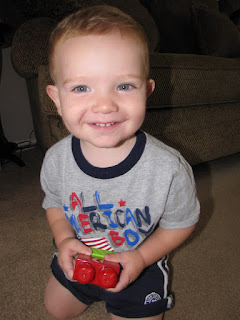 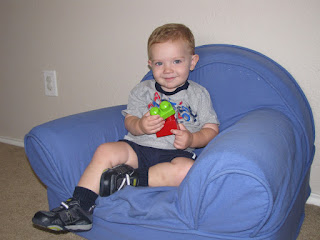 I told Jim, Santa might need to bring Luke a chair like this for Christmas. If Luke is playing in it and Jacob comes close to it, Luke gets so mad!!! 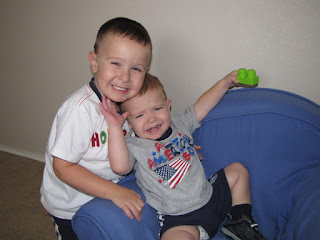 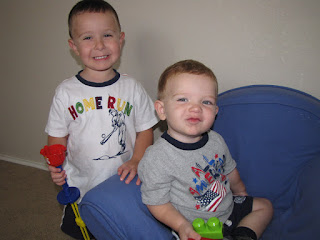 Posted by Katherine at 9:44 PM 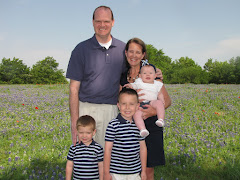